Several years ago, i declared that Amanda Shires, formerly of Lubbock’s famous band Thrift Store Cowboys, was gonna be the “Next Big Thing from Lubbock” which is always a thing. Sure enough, after moving to Nashville and becoming the go-to fiddle player for songwriters like Todd Snyder, Justin Townes Earle, Neal Casal, and Jason Isbell’s 400 Unit and recording three solo albums she became the toast of Nashville songwriters community.
She eventually married Jason Isbell, formerly of Driveby Truckers, who is now considered on the vanguard of Nashville’s modern renaissance in progressive country songwriters and won Americana Music Performer of the Year in 2015. Now Amanda Shires & Jason Isbell are considered Nashville’s newest Power Couple.
This painting is inspired by Amanda’s solo tour shortly after she married, before she became pregnant with Isbell’s child. She included rhythm section Kris “Tugboat” Killingsworth (from Thriftstore Cowboys) and hard-working Lubbock bass player Sean Frankhouser. We caught the show at Austin famed Cactus Cafe.

You can read my interview with Amanda Shires on virtualubbock.com 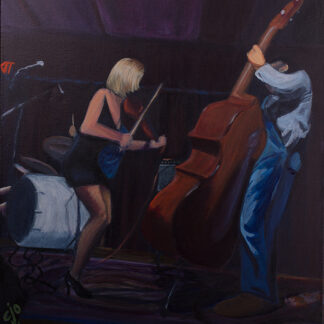