This is based on a still shot from the the 1958 film “Bell, Book and Candle” starring Kim Novak, James Stewart and Jack Lemmon. In the film, Gillian is a modern day witch living in New York who falls in love with a mortal who works in advertising. This film was the inspiration for the 1960s television series “Bewitched” starring Elizabeth Montgomery, which was always one of my favorite shows (in reruns) when i was a kid. My aunt Eloise last year suggested i watch the movie since i had never heard of it before she mentioned it to me. As i watched it, i was mesmerized by this image of Gillian with her familiar cat Pyewacket at the moment she enchants Jimmy Stewart’s character Shep Henderson into falling for her.

Be the first to review “Gillian & Pyewacket” Cancel reply 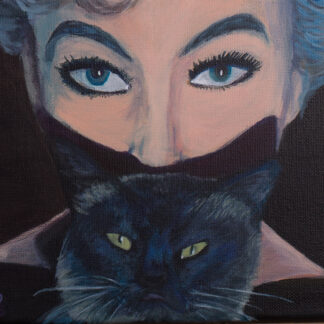