Terry Allen & Stubb are two West Texas & worldwide legends. Terry Allen is one of the great Texas songwriters, considered by many to be the original alt-country recording artist & his songs have been covered by the likes of Joe Ely and Robert Earl Keene to Little Feat and David Byrne. Terry Allen is also a world-class visual artist working in diverse media including musical and theatrical performances, sculpture, painting, drawing and video. Terry Allen’s hometown Lubbock, Texas is where he met barbecue pit-master C.B. “Stubb” Stubblefield, while Allen was recording his landmark “Lubbock: on everything” album. Stubb later went into partnership with some young enthusiastic Lubbock entrepreneurs to fulfill Stubb’s vision “to feed the world” and now Stubb’s sauces do sell worldwide. The downtown Austin music club bears his name as a salute to Stubb’s great appreciation for and support of musicians he loved.

This painting of Terry Allen & Stubb shows them as they appeared in 1980 in front of Stubb’s original barbecue restaurant on East Broadway in Lubbock Texas. This painting is inspired from an illustration on page 20 of the book which I authored about musicians & artists from my hometown Lubbock: “Fire in the Water, Earth in the Air: Legends of West Texas Music” (UT Press 2006), the original photo was provided to UT Press by Terry & Jo Harvey Allen from their personal collection. By the way, I often have regretted the long arcane title i chose for the book because few people can remember it; I once mentioned to Terry Allen that I wished I had called it simply “Dirt,” and Terry replied, “Dirt is a better title.” 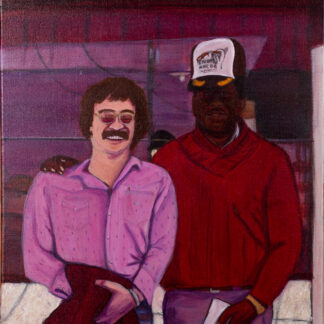