Fire in the Water, Earth in the Air: Legends of West Texas Music (UT Press, 2006)

In stock (can be backordered)

Buy this popular book directly from us and author Christopher J. Oglesby will sign & personalize your copy.

In this award winning book, Christopher Oglesby interviews twenty-five musicians and artists with ties to Lubbock to discover what it is about this community and West Texas in general that feeds the creative spirit. This kaleidoscopic portrait of the West Texas music scene gets to the heart of what it takes to create art in an isolated, often inhospitable environment. As Oglesby says, “Necessity is the mother of creation. Lubbock needed beauty, poetry, humor, and it needed to get up and shake its communal ass a bit or go mad from loneliness and boredom; so Lubbock created the amazing likes of Jimmie Dale Gilmore, Butch Hancock, Terry Allen, and Joe Ely.”

From the Book’s Introduction

Since Lubbock is the place where the earth is in the air and the fire is in the water, it’s naturally got to be the place where the music gets tied up in knots and comes out unraveled.
—Jimmie Dale Gilmore
I grew up like most other folks in Lubbock. I went to church, where my mom taught Sunday school every Sunday, until I moved out of my parents’ house to attend Texas Tech University. Like many other Tech students in the 1980s, I found my weekend rituals at Fat Dawg’s, the Main Street Saloon, the Texas Spoon Café, and P. J. Belly’s. I discovered, as everyone who has lived there knows, that all the social and cultural action in Lubbock happens either in churches or bars. After eighteen years of going to church every Sunday morning with my mother, Saturday night at Fat Dawg’s saloon became both school and church to me. The sober Presbyterians on 33rd Street did not offer the spiritual revival of a Joe Ely show, with Jesse Taylor on electric guitar, Lloyd Maines on pedal steel, and often Rolling Stones saxophone player Bobby Keys blowing the crowd to high heaven with exultant solos.
When I learned as a teenager that Buddy Holly had attended Roscoe Wilson Elementary, Hutchinson Junior High, and Lubbock High, the same public schools I attended, I became enchanted knowing an artist of worldwide importance could come from my seemingly normal neighborhood. After receiving two degrees from Texas Tech University, I moved to Austin, where I became more aware that Lubbock’s fame for producing songwriters, musicians, and artists is equal to its renown for cotton, conservatives, and windstorms. I have interviewed many of these artists over the years, searching for an answer to that oft-asked question: “Why Lubbock?” This book is the product of that exploration.

Fire in the Water

of the best barbecue in West Texas. However, very few other white people ever made the journey to the east side to visit Stubb’s, at least not until Jesse Taylor and Stevie Ray Vaughan started rocking the joint at Stubb’s Sunday Night Jams. Being over there in the dark side of one of the most white-bread towns in America, I remember thinking, even as a youth, “There is something cool here. Why doesn’t anyone in Lubbock know about it or acknowledge it?” C. B. Stubblefield (“Stubb”) closed the small barbecue restaurant in 1984 due to poor finances, and moved to Austin, where several of his friends such as Joe Ely were living. Shortly before he died in 1997, Stubb reopened Stubb’s Barbecue in downtown Austin, where it is now one of the premier live music venues in the Live Music Capital of the World.
I told all this to Jesse Taylor during our first phone conversation and he agreed. “Sometimes I think that Lubbock will never change,” Jesse responded. “They don’t know what genius they have from right there in Lubbock. They could have built recording studios and turned Lubbock into the Nashville of Texas music but they just turn their backs.” He added: “But Austin is almost the same. It’s not at all like Lubbock in that Austin is very open-minded and liberal, but even in Austin, the people here don’t have any idea how much all us guys from Lubbock have done. I’ll go on tour with Bob Dylan or Bruce Springsteen and when I get back to Austin people come up to me and say, ‘Hey, Jesse, why haven’t you been playing down at the Saxon Pub lately?’ People just don’t know what they have here.”
A verse from the Bible has resounded in my mind as I have studied the paradox that is West Texas music and art. “No prophet goes without honor, except in his own country and among his own kin, and in his own home” (Mark 6:4). Perhaps any examination of conservative West Texas must begin by considering the Bible.
The King James Version of the Bible is the seminal text of the English language. Until the late nineteenth century, the KJV was commonly the only book most English speakers owned or read. It has been said that every metaphor, symbol, and story theme in the English language is based on the sacred stories in the King James Bible, and with good reason: These are very good stories. Virtually all truths are contained in this contradictory, poetic, magical epic of humanity’s violent struggle to enter the Kingdom of God.
The fact that the Lubbock community remains deeply immersed in the language and themes of the Bible in a way that may have become unpopular as America has entered the twenty-first century may be one explanation why Lubbock is noted for producing such exceptionally talented storytellers, poets, and lyricists.

Earth in the Air

Moreover, we must consider the uniqueness of the land of West Texas. People in Lubbock thrive in a territory of boundless horizons. In the vast emptiness of the South Plains, there is limitless room for the dreams of creative spirits.

Be the first to review “Fire in the Water, Earth in the Air: Legends of West Texas Music (UT Press, 2006)” Cancel reply 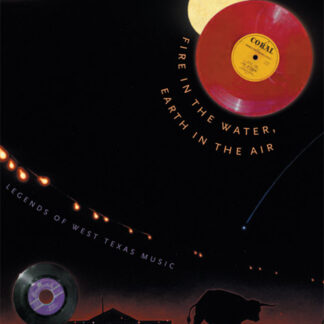