Aaron Franklin at the Pit

Austin Texas has a reputation of being a city with great restaurants and central Texas is known for outstanding Barbecue. Pitmaster Aaron Franklin of Franklin Barbecue is one of the most recognizable figures in the worlds of Texas Barbecue and Austin restaurants, having recently won a James Beard Award and having been featured on cable TV as a barbecue judge and in his own PBS series “Barbecue with Franklin”. This image is based on a still-shot I made when pausing an episode of “BBQ with Franklin” on Austin’s KLRU PBS channel. Fair Warning: Franklin Barbecue is so delicious you must wait in line between two and three hours just for the opportunity to buy it! Celebrities such a President Barack Obama and Jimmy Kimmell sing the praises of Franklin Barbecue from Austin Texas. 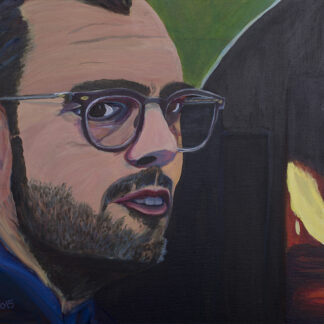