Set of 14 paintings
Available Only as Set
Not Sold Separately

I have completed a series of fourrteen paintings based upon still shots from the 1991 seminal Richard Linklater film “Slacker” set entirely in central Austin. The titles of each work in this series are lines from the movie spoken at that particular moment in the film or a description of the unspoken action portrayed. I have transcribed the time-stamp number from the DVD to the back of the canvases to identify the precise scene.

This series of fourteen paintings will be appreciated by fans of the movie “Slacker” and long-time Austin residents. Austin is a much different town today in the 21st Century than it was in 1990, much more crowded and busy now than the simple slow life which the film’s title implied of those times. Anyone who lived in Austin during the ’80s & ’90s recognizes that much of the Austin portrayed in “Slacker” has gone with the wind. Slacker is filled with scenes evoking fond memories for long-time Austin residents.

The Slacker Series is intended to be a unified work and will be sold only as a Set of 14 Paintings; the individual paintings are not available to be sold separately.

I’ve always intended for this series of paintings to be viewed in a serial manner somewhat like the Stations of the Cross. While some scenes I chose to use what might be considered more obscure, I tended to be interested mostly on each scene’s particular lighting & composition. However each of the thirteen scenes seems to me as representative of many of the basic themes of the movie, when viewed as a whole.
Here is a brief summary of each scene in the series. 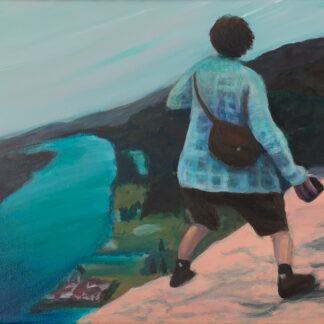