Outside the Emporium, Dazed and Confused

I had been wanting to do this one for some time and I’m kinda partial to it; another scene from the Richard Linklater movie “Dazed and Confused” filmed in Austin, famously a launching pad for many now-big stars including Matthew McConaughey seen here. I think this image alone tells an interesting story throughout.
I worked it in a chiaroscuro style, as the scene is at night under the lights outside an Austin pool & foosball hall.

I was showing this painting at Art City Austin 2019, and someone claimed to have been on the crew  for the 1993 film and swore the uncredited woman walking through this scene is Renée Zellweger. I’m just saying this guy told me that. Although, she is definitely in the movie, thought uncredited (clue: beer bong with Parker Posey).

Be the first to review “Outside the Emporium” Cancel reply 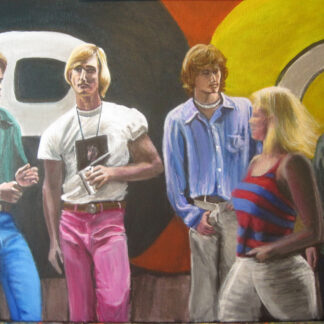