In this modern interpretation, the Roman god of war Mars is desperate to wreak havoc while backed by a naked Fury, but War & Fury are held back by Minerva the goddess of Wisdom and Mercury bringer of knowledge from the Gods; Minerva and Mercury are protecting Ceres, a Satyr, cherubs and nymphs who provide bounty and joy to innocent children, here the children are modern Texans, the younger wearing a Dallas Cowboy cheerleader outfit and the older is in a traditional Mexican dress. All of this bounty is the result of Minerva protection from Mars.

I ws been watching a series on Amazon Prime called “Great Artists with Tim Marlow” about the usual Masters & ninja turtle namesakes; yesterday I watched Peter Paul Rubens. I was familiar with much of his work & influence but did not know much about him personally, and I did not know that Rubens was also a career diplomat. Also, I had never seen a particular image of his from his later life while on diplomatic peacemaking sojourn in England: “Minerva Protecting Peace from Mars” 1629-1630. The idea fascinated me so I attempted this recreation in acrylics and my own style. 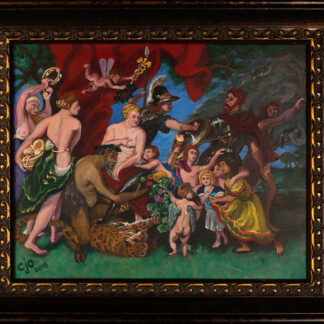 You're viewing: Minerva Protects Peace From Mars $2,500.00
Add to cart