Scene from the movie “Giant“

James Dean is considered one of American’s greatest film stars, despite having starred in only three movies during his lifetime. In 1956, Giant, also starring Rock Hudson and Elizabeth Taylor and featuring a young clean-cut Dennis Hopper, was released after the tragic ’55 death of James Dean in an automobile accident.
In the movie Giant, based on the novel by Edna Ferber, Bick Benedict is a Texas rancher who marries an eastern woman played by Elizabeth Taylor. James Dean plays a cowhand names Jett Rink, hated by Bick but adored by Bick’s sister Luz. When Luz dies in a bronco accident, Bick learns Luz has left a section of seemingly worthless ranch-land to Jett Rink. Jett single-handedly drills for oil on his section and he hits a gusher, making him one of the richest men in Texas, no longer to be lorded over by the Benedicts.
IN this scene Jett Rink has rushed to the Benedict house in order to demonstrate to Bick his newfound wealth. Jett then sucker punches Bick before he leaves the ranch Reata for good, to build a giant hotel in downtown Houston.

Be the first to review “I’m Rich” Cancel reply 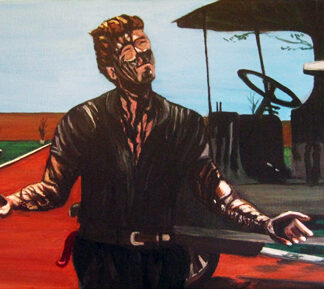