Please enjoy this colorful acrylic painting, 16×20 canvas in black frame. Many people in Austin get around using bicycles for many reasons: healthy exercise, reducing traffic, ease of parking, etc.

The Yellow Bike Project is a non-profit organization that has been working for 20 years to get more bikes on the streets of Austin through operating community bike shops, teaching bike mechanics and maintenance, and acting as a local bike advocacy group.
In 1997, the original Yellow Bike Project volunteers released the first 24 Yellow Bikes. Modeled after the Dutch White Bikes of the 1960s, Yellow Bikes were community bikes that are free to ride but not to keep. These bikes had been destined for the landfill, but were redirected out of the refuse stream, reconditioned, and released for everyone to share. To date, Yellow Bike Project has released hundreds (perhaps thousands?) of Yellow Bikes.

However, most of the Yellow Bikes that were released ended up being kept by individuals as a personal bike. Although this didn’t align with the stated purpose of releasing community bikes “to ride but not to own,” Yellow Bike Project realized that those willing to commandeer a clunky old Huffy hand-painted yellow were very much in need. If you look closely around Austin, you might still find Yellow Bikes that were repainted other colors to mask their identity. The ultimate intent of Yellow Bike Project was to make bicycle transportation available to all, especially those in need, so it’s all cool.

Be the first to review “Yellow Bike” Cancel reply 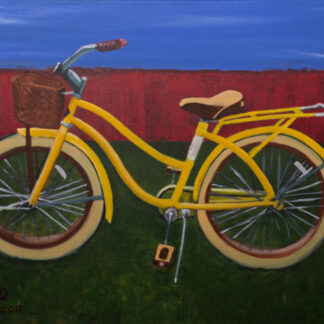