Scene from the Wild West

This acrylic painting features a pack of western white wolves attacking an aged bison bull that has been separated from his heard. The wolves have taken the bison’s eyes and mauled his underside but the bull remains standing while several of the wolf pack have paid a bloody deadly price for the group’s effort.
George Catlin (1796-1872) was an American artist who specialized in authentic portraits of contemporary living native Americans, and he was probably the first man of European descent to portray America’s Plains Indians. Many of Catlin’s scenes are sketches, made during or soon after the scene portrayed. Some he later developed into oil paintings or lithographs which Catlin handed colored.
This particular scene is based on a 1844 hand-colored lithograph by Catlin, presumably based on a scene he actually witnessed by George Catlin.
On a personal note, the artist yours truly Christopher Oglesby made this painting shortly after his own father, Gerald “Corky” Oglesby  was diagnosed with pancreatic cancer in the summer of 2017. Corky was fighting valiantly but was well-aware his days were numbered. This painting reminds me of that experience. 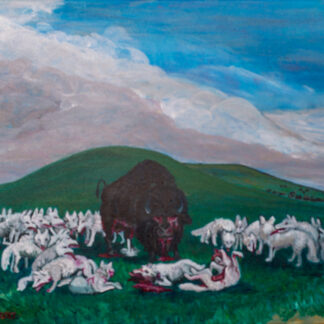