Alternate Title: “Utility, Serendipity, and You”

In October 2014, my wife and I traveled to my hometown Lubbock Texas to watch Paul McCartney perform in concert there. The following day, we headed to Ruidoso, New Mexico to stay with friends who had recently purchased a vacation home there. The light and landscape in the West Texas area around Lubbock are often conducive for finding interesting things to photograph, with great sharp shadows and broad surrounding vistas.  I had instructed my wife to keep her eyes open that morning for anything that might be good to capture photographically to use for future painting subjects. As we passed through Brownfield, Texas and made the turn heading toward New Mexico, it was about 10:30a.m. when my wife said with a sudden point, “That looks cool.” That was simply a large round storage tank on a dirt lot but the angle of the sun in relation to the metal staircase wrapping around the tank produced an amazing shadow on the southeast side. It is one of those moments when the mundane becomes transformed in the marvelous by the play of light and shadow found so often in the wide-open spaces of West Texas; thus the alternate title: “Utility, Serendipity, and You” 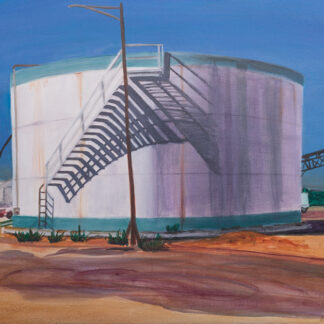