I had never done an extensive collage before, and I don’t know what inspired me to do so other than the fact that I was at Target a few weeks ago, and colored paper was on sale. “Maybe I could use cut & torn paper instead of paint?” I thought. I bought the paper and some Mod Podge.
I now had to consider, what image do I “paint” with this paper? When we got home, I saw a framed color cartoon poster by Texas artist Ben Sargent, which I had bought in 1986 celebrating the Texas Sesquicentennial; it is a poster of Sam Houston anachronistically leaning on a pickup truck, looking out over an expanse of Texas, with the word Texas in the sky, and the name SAM on the license plate which is dated 1986. Since the poster is a cartoon, the colors where all pretty basic and delineated, so I thought that image appropriate to riff on for my winging it attempt at collage.
I happened to have in my garage also a large kinda tacky print on artboard which I had bought at a thrift store years ago simply because the frame looked like something I could reuse on my own work. So I popped the board out, charcoal sketched the outline of the image, then just started tearing and cutting paper. 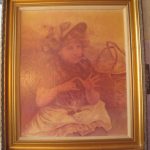 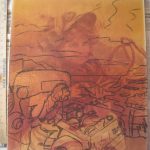 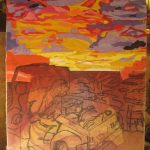 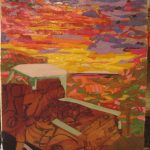 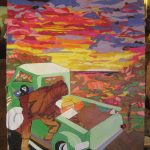 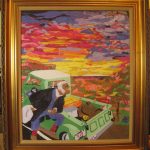 My final image is modified some from the original Sargent image by which I was inspired; I made the truck to look like an old Ford my dad once owned which I really liked; the man is not intended to be Sam Houston, and some of Houston’s regalia is omitted, and his suit is converted to Levi’s jeans & jacket; i also think he might be of Mexican heritage; the license plate is my signature & this year’s date. Note that I used actual wire for the barbed wire fence and the hay bailing wire, mostly because I didn’t want to attempt cutting paper that thin & also i thought it would look pretty cool.
When I was done, I put the board back in the original frame. Tada!

In honor of the Texas Sesquicentennial from which the original image was inspired, I am willing to sell this collage piece for $1986. 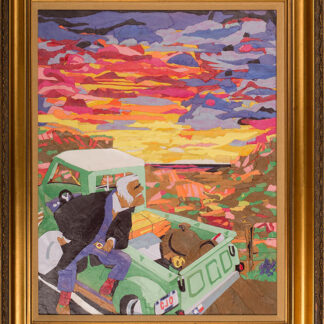