This image is an interpretation of an 1864 original painting by Scottish landscape artist Horatio McCulloch (1805-1867). I made this painting in a style emulating that of my own grandfather, Gerald Oglesby, Sr., who was a well-known 20th Century regional artist from Oklahoma specializing also in landscapes. Grandad, also known as Crazy Jerry, often used heavy acrylic gels to create a thick three dimensional looking image.
I have never been to Scotland myself but Oglesby is an old Scottish name. My family, like many Scots, emigrated to America in the 19th Century. My mother’s maternal family names were Ogilvie (related to the Oglesby’s) and Thompson, but common Scottish names as well.

Be the first to review “Glencoe Scotland” Cancel reply 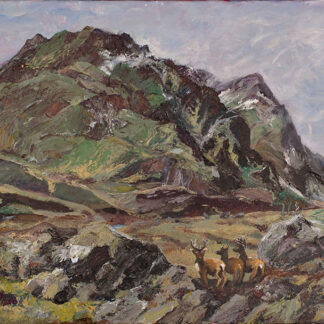