Richard Linklater’s 1993 film “Dazed and Confused” is an Austin Texas film classic. I happen to see it in a north Austin theater the week it was released.  I’ve made several paintings inspired by Linklater’s films, which to me represent local mythology and history paintings.

I had always considered Pickford (seen here in the chair, straddled by his girlfriend) to be the hidden hero of Dazed and Confused, and after reading the new book “Alright, Alright, Alright”  by Melissa Maerz (Harper, 2020), it appears that Linklater had originally intended that to be so but troubles with the actor caused several key scenes to be taken over by Matthew McConaughey as Wooderson, cementing Mac’s road to stardom, and probably also the obscurity of the guy who played Pickford. Mila Jovovich took a break from acting for awhile after “Dazed” but she turned out pretty good. 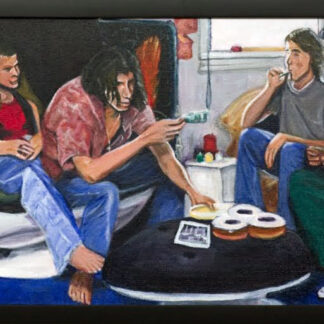