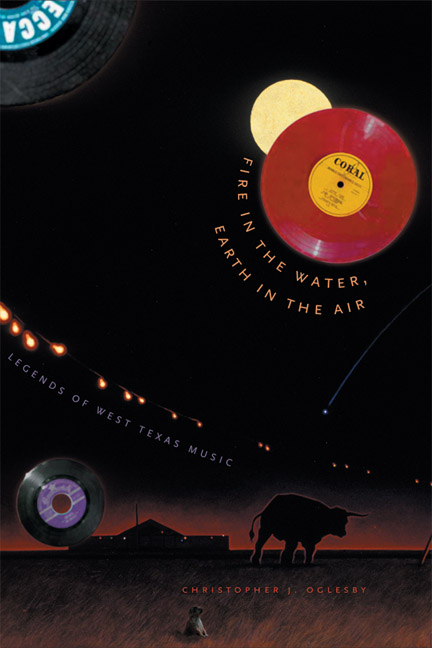 September 2016 marks the Ten Year Anniversary of publication of the book  which I authored:
“Fire in the Water, Earth in the Air: Legends of West Texas Music.” (UT Press 2006).

On Thursday September 15, 2016 after the Walk of Fame induction, we will celebrate the 10 year anniversary at Tornado Gallery (1822 Buddy Holly Ave) with a book signing reception featuring live music by some of the artists in the book including Cary Swinney, Wade Parks, and other unannounced special guests.

I the author  will have copies of the book for sale to sign, and guests also may bring their own copy to be signed.

Here is a link to the event announcement: Ten Year Anniversary Reception – Meet the Author

Since the book’s publication and the commencement of Pretty Cool Art, I have painted several artworks based on subjects in the book.

When the book was published we had a book signing party at Stubb’s in Austin and many musicians featured in the book showed up and performed. Perhaps the highlight of my book signing party at Stubb’s BBQ in Austin on November 12, 2006 is captured in this moment. Jay Boy Adams is one of the musicians featured in my book, an incredible southern rock guitar player who had two albums on Atlantic before mostly retiring from performing in 1980 when he started a tour bus outfitting company which transports many of the biggest music tours on the road: Springsteen, ZZ Top, Shania Twain, Ringo Starr, etc. For many years, the Jay Boy Adams band was the opening band for ZZ Top on tours and after his set at each show, Jay Boy was Billy Gibbons personal guitar tech, keeping BFG’s guitars strung and in tune.
So the night of my book signing party, Jay Boy shows up with a full band in one of his buses, parks right outside Stubb’s. After many amazing performances that evening, murmurs go ‘round that Billy Gibbons is in the room. Bob Livingston, who was running the stage, said Gibbons wanted to get on stage and play. I said, “Let him.” Gibbons borrowed Lubbock guitarist Steve Lotts’ Strat and played one blues number with the band . I was sitting on the side of the stage dumbstruck. Jay asked me afterward what I thought; I said that, other than when I got married, it was the greatest moment of my life; truly amazing moment.

If you don’t believe it happened, here is some video from that night:

Here is a gallery of more West Texas Art by Christopher J. Oglesby that are inspired by West Texas Music:3333

* The Crossroads of Music Archive, located in the Southwest Collection/Special Collections Library at Texas Tech University, is proud to announce the opening of the exhibit:  Fire in the Water, Earth in the Air by Christopher J. Oglesby. The exhibit honors the upcoming tenth anniversary of the book—Fire in the Water, Earth in the Air: Legends of West Texas Music by Christopher J. Oglesby. Curated by the archivist for the Crossroads of Music Archive, Curtis Peoples, Ph.D. and fabricated by Lyn Stoll, the exhibit is a small collection of snapshots highlighting some of the artists found within the book. Some of these artists include Tommy Hancock, Terry and Jo Harvey Allen, Joe Ely, Kimmie Rhodes, and others.

The exhibit happened after Chris Oglesby donated his research materials for the book to the Crossroads of Music Archive earlier this year. While processing and inventorying the collection, a decision was made to construct an exhibit to showcase the book. During the selection of materials, Chris informed Curtis that the tenth anniversary is September 1, 2016. Chris and Curtis are now working together to plan an event to celebrate the tenth anniversary release of the book; the date is Sunday September 15, 2016. A smaller traveling exhibit will be featured at the event along with live music. More details about the event will be forthcoming, so stay tuned.

The fixed exhibit is located in the Coronelli Globe Rotunda at the Southwest Collection/Special Collections Library located on the Texas Tech campus at 15th and Detroit.