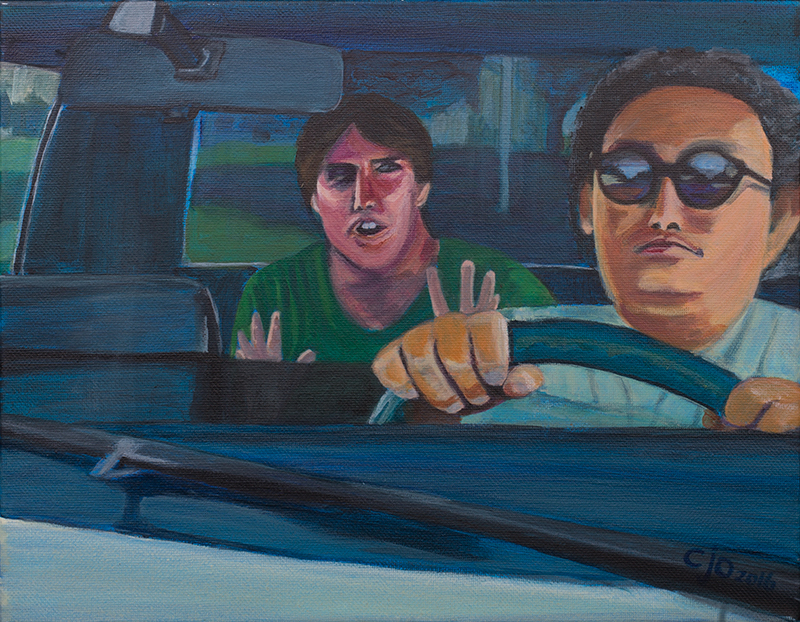 I have completed a series of fourteen paintings based upon still shots from the 1991 seminal Richard Linklater film “Slacker” set entirely in central Austin. The titles of each work in this series are lines from the movie spoken at that particular moment in the film or a description of the unspoken action portrayed. I have transcribed the time-stamp number from the DVD to the back of the canvases to identify the precise scene.

This series of fourteen paintings will be appreciated by fans of the movie “Slacker” and long-time Austin residents. Austin is a much different town today in the 21st Century than it was in 1990, much more crowded and busy now than the simple slow life which the film’s title implied of those times. Anyone who lived in Austin during the ’80s & ’90s recognizes that much of the Austin portrayed in “Slacker” has gone with the wind. Slacker is filled with scenes evoking fond memories for long-time Austin residents.

The Slacker Series is intended to be a unified work and will be sold only as a Set of 1 Paintings; the individual paintings are not available to be sold separately.

I’ve always intended for this series of paintings to be viewed in a serial manner somewhat like the Stations of the Cross. While some scenes I chose to use what might be considered more obscure, I tended to be interested mostly on each scene’s particular lighting & composition. However each of the thirteen scenes seems to me as representative of many of the basic themes of the movie, when viewed as a whole.

Here is a brief summary of each scene in the series.

Having lived in Austin for almost twenty-five years, Richard Linklater’s seminal film “Slacker” is one of my all-time favorite movies. But the first time I ever saw Slacker, I hated the film. However, like Austin, everything changes with time.

I had spent the summers of 1990 & ’91 working and playing in Austin, then after graduating Texas Tech a leaving Lubbock for a brief sojourn in Washington DC, I returned to Austin in August 1992 as a mostly permanent resident. I had less than $30 in my pocket and no car but lifelong friends from Lubbock offered a futon in their living room, and I quickly landed a minimum wage job working at the front desk of the Driskill Hotel on 6th Street.

I had many friends in Austin, most with an advanced degree or two and everyone either under- or unemployed; many were aspiring writers, artists, dancers, musicians & entrepreneurs. My friends mostly congregated in an un-air-conditioned pre-war frame house on East 35th street owned by the father of some friends from Amarillo, so the rent was low for the 3 or 4 people who were always living at the two bedroom house.

We spent a lot of time listening to records, reading books, writing & singing songs, swimming in the creeks, and scrounging up enough money for beer and other diversions, such as video-tape rentals from Vulcan Video. So we had all heard of a cult movie made in Austin a year or so before, the name of which seemed to be hanging on everyone we knew, “Slacker.”

Vulcan Video on the Drag

It was probably Sally Milton who went to the trouble to rent the videotape from Vulcan Video, so one afternoon we sat down to watch the locally-made film everyone was talking about.

When the movie was over, I arose from the dog-haired covered couch and announced that was the worst movie I had ever seen because a movie should be a diversion from one’s own life and that movie was EXACTLY the way our life was at that time.
Those exact same crazy people were wandering in & out of our living room initiating the same inane cosmic conversations, so I felt I had in no way been taken away from my current situation and so that was a waste of my time.

By the way, one of those friends ten years after the making of Slacker was named by the Austin American Statesman as the first runner-up in a contest searching for Austin’s truest Slacker; I told him that because he came in second place, he actually won because what true Slacker wants to win a contest?

I now own the Criterion Collection Director Approved Special Edition Double-Disc Set of Slacker, which also contains documentaries about the making of the movie and locations in the movie which no longer exist as they were, interviews with the actors and original screen tests, etc.
Slacker now is recognized as a seminal film affecting a generation of do-it-yourself filmmakers including Robert Rodriguez, Quentin Tarrantino, Kevin Smith, Wes Anderson, etc.

I have seen Slacker dozens of times now. For the exact same reason I hated watching the VHS tape almost 25 years, I now cannot get enough of it because Slacker does accurately reflect what our life was like in Austin Texas then: slower moving, more deliberate, less to worry about – in short: nostalgia.