The Asylum Street Spankers played mostly cover versions of early jazz and comical, often risque original songs. The -co-founders included Guy Forsyth and Wammo; the players changed throughout their existence as a group; pictured here is the original lineup from 1996. Asylum Street was the old name for the north end of Guadalupe Street that ran by the state psychiatric hospital, where’d they’d often perform at joints like the Austin Outhouse. The spanking came from the band inviting whoever had a birthday to join them on stage where co-founder Christina Marrs would spank the unsuspecting guest hard with a big wooden paddle. 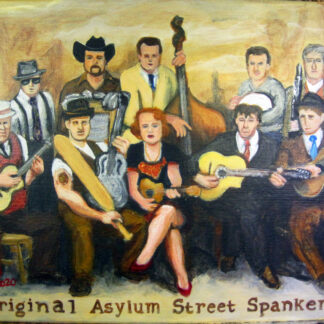