Tugboat & Dan are two musicians now living in Nashville but who originally are from my hometown Lubbock, where they were part of a successful band called Thrift Store Cowboys (which also featured Nashville via Lubbock singer/songwriter Amanda Shires of The Highwomen). Daniel Fluitt (with the guitar) is a fantastic songwriter and haunting singer, and Kris “Tugboat” Killingsworth (on the floor) is one of the best drummers I’ve ever seen. This scene is based on a photo that Daniel posted to social media regarding a Tuesday night gig they had at some Nashville coffee house. I asked both them if I could make a painting from it and Dan said, “Please do!” So I did.

Be the first to review “Tugboat & Dan” Cancel reply 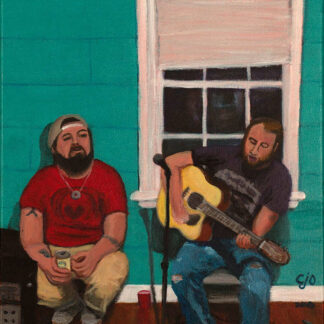