One Water, One Coffee, One Beer

One Water, One Coffee, One Beer

One Water, One Coffee, One Beer: The perfect refreshing combination after the mile walk from my home & studio in South Austin to the nearest coffee house/pub, which happens to be Spokesman Coffee on East St Elmo. Spokesman roasts their own blends of coffee in house, and also provides an eclectic rotating selection of Austin’s local craft beers. They have a nice shaded garden outside on the side. Spokesman also serves healthy and tasty breakfast and lunch fare.
I believe in acting locally as much as possible, including drinking local coffee and beers, and painting scenes of South Austin life familiar to me. Paint your Neighborhood, is one of my mottoes. I like hanging out at Spokesman and other local craft spots such as St. Elmo Brewing Co. and Skull Mechanix, to name a couple of other favorites. When in South Austin, i recommend you visit these fine establishments.

When in Austin, remember to stay hydrated, and to follow Bill Murray‘s drinking advice, made while in Austin at South by Southwest Festival: one glass of water for every alcoholic drink.

Be the first to review “One Water, One Coffee, One Beer” Cancel reply 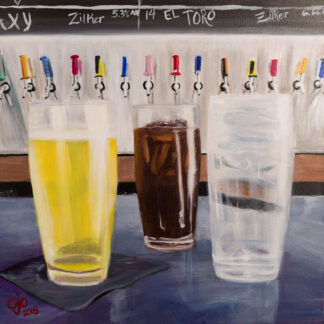