The Legendary Stardust Cowboy at the Continental Club

(excerpt from interview by Chris Oglesby on virtualubbock.com)

The Legendary Stardust Cowboy may be Lubbock’s most remarkable and puzzling musical genius. As he told me, the music of the Legendary Stardust Cowboy is “middle-of-the-galaxy, not middle-of-the- road.” Anyone who has heard or seen the Lege perform knows this is true. Lubbock native Norman Odam left his hometown Lubbock Texas for Fort Worth to start his incredible recording career. A then unknown radio deejay named T. Bone Burnett, also only 20 years old at the time, discovered “The Lege” and made his first recording of his signature song “Paralyzed.” Less than a week later, the Stardust Cowboy signed with Mercury Records. Soon he made his legendary nationally televised appearances on the Tonight Show with Johnny Carson and Rowan & Martin’s Laugh-In. The cacophonic, almost incomprehensible song “Paralyzed” made the Billboard Top 100 briefly in 1969, an odd year for music anyway. Apparently, Odam felt that any true self-respecting cowboy in the later 20th Century would not resemble the smooth stars of country music but would rather be riding the new frontier of 4th dimensional psychedelia, which is what one experiences when hearing “Paralyzed.”
This painting is inspired by an original photograph made by the artist cjo on the evening of September 30, 2002, during filming of a documentary movie I was assisting to produce. It was a trip. I remember thinking that was one of those events you either really love or really hate. I love it! 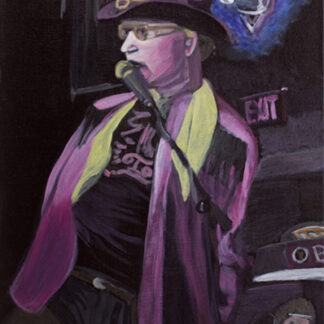 You're viewing: The Legendary Stardust Cowboy at the Continental Club $925.00
Add to cart