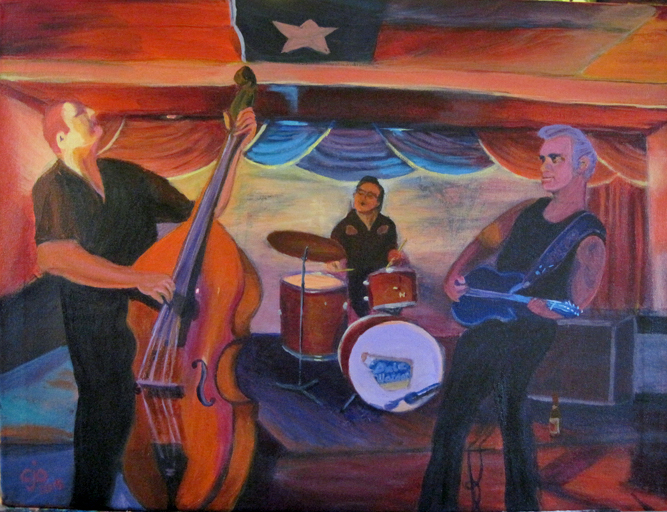 This work hangs over the fireplace in the central barroom at Hyde Park, 10/25-12/6.
Because Austin is one of the fastest growing cities in the country, this view of the heart of the South Congress Avenue tourist district, looking toward downtown, is already a bit dated. The skyline has broadened and deepened, businesses have come and gone, signs change, the weather and trees, etc. In this triptych we see such landmarks as the San Jose Hotel and Jo’s Coffee, The Austin Motel, The Continental Club and Amy’s Ice Cream as well as sites only in the past such as Zen asian restaurant, the Southside Tattoo sign and parallel & front-end parked cars.
This is a triptych set, not sold separately.

This painting hangs by the front door at Hyde Park, 10/25-12-6.
My home has long been known affectionately as the Lubbock Music Consulate to South Austin. My wife and I have hosted about a dozen public house concerts in our living room, and the common theme has been all the artists have been from Lubbock or have some association with Lubbock music. Our first house concert was Amanda Shires with Rod Picott in 2009; that night I declared Amanda would be the Next Big Thing From Lubbock (which is always a thing) and that has since proven true with a big career in Nashville and her marriage to Americana music hero Jason Isbell.  We’ve hosted Bob Livingston of the Lost Gonzo Band; Colin Gilmore & Jon Notorthomas; Lubbock legend Junior Vasquez and his daughter Tori Vasquez (who I’d venture to say is the new Next Big Thing From Lubbock); and many more excellent musicians and storytellers right there in our living room, which is a treat like no other which everyone should experience.
My brother-in-law David is an excellent amateur photographer with a great eye for composition and light, and he regularly takes pictures at our events. This large painting is inspired by one of David’s photos of musicians’ gear before our 7th house concert on Feb/12/2011, which featured The Prairie Scholars aka Andy & Jessica Eppler, Lubbock natives who are now firmly ensconced in Longmont Colorado, and our good friend Doug Haines aka Doctor Skoob, of Lubbock via Texas Tech who is now a master of literature in North Carolina.

This piece was the featured work in the April 2015 exhibit at Tornado Gallery in Lubbock.

This painting hangs by the front door at Hyde Park, 10/25-12-6.
Dale Watson’s is hailed as a savior of traditional country music and his “Ameripolitan sound” has become synonymous with Austin music. Any visitor to Austin must visit Ginny’s Little Longhorn salon on a Sunday and experience Dale Watson’s afternoon show and Chickenshit Bingo. This painting is inspired by a show at Gruene Hall, the oldest operating dance hall in Texas near Boerne south of Austin.

This painting hangs by the front door at Hyde Park, 10/25-12-6.
My friend Stefan is a sound technician, a very important job in Austin Texas “The Live Music Capital of the World.” Stefan has worked sound for many music events I have produced and is a consummate professional, never lets me down, always does great work. This image is based on a shot posted by Stefan of his home music studio in Austin Texas.

“Aaron Franklin at the Pit”

This painting hangs over the doorway to south room at Hyde Park, 10/25-12-6.
Austin Texas has a reputation of being a city with great restaurants and central Texas is known for outstanding Barbecue. Pitmaster Aaron Franklin of Franklin Barbecue is one of the most recognizable figures in the worlds of Texas Barbecue and Austin restaurants, having recently won a James Beard Award and having been featured on cable TV as a barbecue judge and in his own PBS series “Barbecue with Franklin”. This image is based on a still-shot I made when pausing an episode of “BBQ with Franklin” on Austin’s KLRU PBS channel. Fair Warning: Franklin Barbecue is so delicious you must wait in line between two and three hours just for the opportunity to buy it! Celebrities such a President Barack Obama and Jimmy Kimmell sing the praises of Franklin Barbecue from Austin Texas.

This painting hangs in the southeast corner of the main barroom at Hyde Park, 10/25/-12/6.

Based on a photograph taken by my brother-in-law David when he, my wife and I enjoyed an excellent bout of Austin bank-track roller derby on March 19, 2006: Rhinestone Cowgirls v. Holy Rollers featuring Sister Mary Jane. I’ve been to several roller derby bouts but this was our first time. By the way, i happen to own the DVD boxset of 2006 A&E series “Rollergirls” featuring both these teams set in a very familiar Austin Texas.

I like the idea of illustrating song lyrics as a source of inspiration for work, and Lubbock native songwriter Jimmie Dale Gilmore has written many image evoking lyrics. The opening line of Gilmore’s “Where You Going” is: “I’ve seen crimson roses growing through a chainlink fence.” To me, that line evokes the idea that roses are both wild & beautiful, and though often tamed roses cannot be restrained by human culture. It also means we can free our minds from any apparent constraints by following our own nature, which i tried to depict in this painting.

Slacker movie still-shot paintings: #1, #2 & #3
Three 11×14 canvases, black frames
This set of paintings is displayed together in the northeast front room at Hyde Park, Oct 25- Dec 6.
They can be purchased individually or as a set of three.
Richard Linklater’s seminal 1991 film “Slacker” defines an era for many us who have lived in Austin since those days. Much of the scenery has changed in the past 24 years, the city is taller and more crowded, traffic is worse and business is booming in Austin. I’ve seen the movie probably a dozen times. I hated it the first time i saw it in 1992 because it was not an escape at a;l from my real life, that was what life was pretty much like in Austin then, the same crazy people coming in and out of our living rooms. Now i adore watching Slacker: for the brilliant, prescient conversations (global warming is treated as a fringe conspiracy theory) and the nostalgic views of an Austin long-gone.
The titles of each of these Slacker paintings are essentially the lines that are being spoken by the characters in that scene at that moment.

This painting hangs in the big north room  at Hyde Park, Oct 25-Dec 6.

This is a view I see almost every weekend when my wife and I run the 5 mile course around Ladybird Lake in Austin. I now often feel as if I am running through my painting when we get to this spot on the trail, north side of the river, just below the Radisson Hotel & the restaurant now known as Chavez. The bats can be viewed from here as well.

This painting hangs by the doorway into big north room at Hyde Park, Oct 25-Dec 6.

Most of my paintings are inspired by photographs. Seldom do I make up an image in my mind and base a painting entirely on that. However, as this title suggests, I had an intense dream one night that I should paint this image and call it Calcined Plains, which is a very dream-like pun. The angle approximates that of the Great Pyramid of Giza and the measurements of the cells are related in a Fibonacci Sequence. The images themselves are repeated renderings of the flat arid farm landscape around my hometown Lubbock Texas.

Chris Mosser is a popular morning deejay on KVET FM radio in Austin. He also happens to be originally from my hometown Lubbock and one of many talented musicians I interviewed for my book and website about west Texas musicians; I consider him a friend and fellow Red Raider. I often find inspiration from photos posted by my friends on social media and that’s where this one started, when Chris was enjoying a vacation in Fort Worth.

Jenny & Elizabeth are Austin friends who volunteered as bartenders for music shows i hosted at a local brewery. But that gig was over and it had been awhile when we ran into each other at Austin City Limits Festival 2014. Jenny had admired my paintings (via my facebook posts), and she issued a challenge as she snapped a selfie with Elizabeth, “Paint this.” So eventually i did. A fun painting of some real fun ladies.

My friend Donny is young, adventurous and has a really keen photographic eye. Donny frequently finds himself in interesting situations and places and often will send me copies of his fine photos. This painting is based on a photo Donny took while kayaking on Ladybird Lake with our friend Stefan (that’s Stefan in the kayak in this painting). You might recognize the iconic Pac-Man graffiti and NEVER GIVE UP slogan on the MoPac train bridge crossing from south Austin into downtown.

My first show at Tornado Gallery in Lubbock officially began  on Friday April 3, 2105 and I had to be in Lubbock that Wednesday to install the work. So with Thursday wide open, my wife and i made the drive to Caprock Canyons State Park to explore the hiking trails. That hike may have been one of the most physically taxing trails I have ever been on in a state or national park, but the temperature was mild, we had plenty of water and the the scenery was uncanny after an unusually wet spring in west Texas. I took many photos, including several of the beautiful wildflowers thriving along the dusty trail. I painted this based on one of those photos; i believe this flower is called a Purple Ground Cherry.

This painting is displayed in the northeast front room at Hyde Park, Oct 25- Dec 6.

On Suburban Avenue in South Austin, our eager neighbor placed out their unwanted sofas a couple weeks early for large trash day last summer. It was my wife’s idea for me to paint a picture of them, she slowed the car down while i snapped the photo that inspired this painting. I really enjoy finding beauty in mundane things nearby me, and I get a kick out of this iconic South Austin image.

This work is displayed in the northeast front room at Hyde Park, Oct 25- Dec 6.

Martie Maguire, Natalie Maines, and Emily Robison are the Dixie Chicks: top-selling all female band of all times, thirteen grammy awards, and still the biggest selling country group ever in the US. They took on Sony, then they took on the military industrial complex and the President of the United States. Fearless, talented, and beautiful, the Dixie Chicks remain heroic figures.
These are two paintings with black frames, top & bottom, and are sold only as a set, not separately.

This work is displayed in the northeast front room at Hyde Park, Oct 25- Dec 6.

Texas has plenty of wind and plenty of space to develop alternative fuels such as electricity created by wind-driven turbines. When we drive from Austin back to see family in Lubbock, my wife and I are always astonished by these beautiful, grand and efficiently designed machines.

to purchase any painting from this Hyde Park show, please contact Anne Ducote, 512-422-7643, anne.ducote@att.net
click on thumbnails to view each entire image.