The Spoon is one of the most enduring and endeared music venues in in the legendary Lubbock music scene. It’s been there since I was in college at Texas Tech in the early 1980s and it is still rockin’ today. The Spoon is also famous for its potent Blue Margaritas, sold by the pitcher and featured here on the bar.

My favorite personal story about the Spoon, among hundreds, is the first time I saw Rolling Stones sideman Saxophonist Bobby Keys honking his Sax with the Ace Liquidators who included Danny Raines & Joe Don Davidson,  former members of Lubbock’s awesome band The Planets. I was there for Happy Hour with a friend, right in front of the stage, when two women who were older than us told me, “That guy right there played the Sax on Brown Sugar. He’s basically a Rolling Stone.” I said, “This guy?” Pointing to Bobby Keys three feet away from me.

Many years later, i was privileged to interview Bobby Keys for my book “Fire in the water, Earth in the Air: Legends of West Texas Music” (UT Press, 2006) and ended up having a very nice relationship with Keys and his wife. 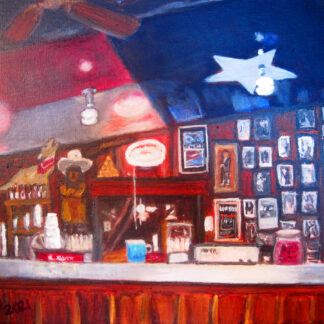