This abstract image is a playful reference to fellow artist and former Lubbock denizen Hills Snyder. Sharing a background from Lubbock Texas, Hills Snyder and artist Christopher Oglesby are friends, and Oglesby had declared Hills to be the Lubbock artist with the most ironic name. This colorful abstract image is inspired by a series of works by Snyder exhibited first in 1998 as a show entitled Gloville, which featured many playful images riffing on popular images such as the sign of the cross and happy faces.
This particular image is a slight skewing of Hills themes, with Oglesby’s own color selection and design, in such a way that we suspect this is one of Oglesby’s few political commentary allegories; Hills assures Oglesby that his work was never entitled to be political.

Hills Snyder is an American artist from Texas who explores history and myth through installations that playfully combine arcane and pop cultural references. Snyder’s propensity for punning, coupled with his interest in means of making sense (and nonsense), infuse his work with insights that transcend everyday ironies to touch on universal themes.
Evoking associations that are as often literary, philosophical, or religious as they are political or art historical, Snyder’s projects expose hidden meanings in familiar images.

Be the first to review “Owed to Hills Snyder” Cancel reply 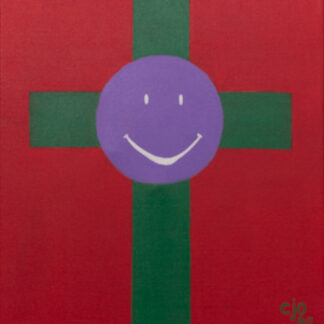