Pop music superstar Lizzo, born Melissa Vivianne Jefferson, started playing flute at Alief Elsik High School in a suburb of Houston, Texas. She attended band camps, and dreamed of the Paris Conservatory and completing her undergraduate degree at the University of Houston. LIzzo told CBS News , “It’s (the flute) a very difficult instrument. I became, like, obsessed with being good.”
Although Lizzo left the University of Houston before graduation due to personal and family struggles, and she adopted the Lizzo persona and started recording professionally, Lizzo integrated solos and flute samples into her popular music, with the first piece being dedicated to her father. “He wanted me to play the flute so bad,” she told CBS. “And so there was this breakdown in the song. And I would pull the flute out. And I’d go [makes noise]. And I went crazy. Oh, my God, I played the flute in honor and tribute to him. And people went crazy. People went wild. And it made me feel close to him.”
Now, Lizzo’s flute is a mainstay in her music, being featured on many of her popular tunes. 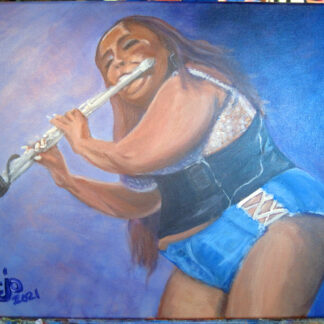