Art Inspired by Other Art

Art inspired by other art is another common theme of my artwork. Occasionally I like to emulate the styles or themes of master artists, and sometimes I like to incorporate their artworks  in the background of my own subjects. This painting “Cleaning Up” falls into the prior of those two categories.

American artist & illustrator Norman Rockwell made a painting he called “Charwomen in Theater” that was featured as the Cover illustration for “The Saturday Evening Post,” April 6, 1946.
Here i have adapted the theme and structure of Rockwell’s concept to a modern setting and made in my own style rather than Rockwell’s. My adaptions include: rather than Irish cleaning women, my immigrants are from Central America; and they are literally “Cleaning Up” both after the patrons and in order for their dependents to become upwardly mobile.

Manuel Lin Miranda’s “Hamilton” is in part about an immigrant’s opportunity for upward mobility in America. My modern immigrant cleanup women are inspired by this modern concept Broadway musical. 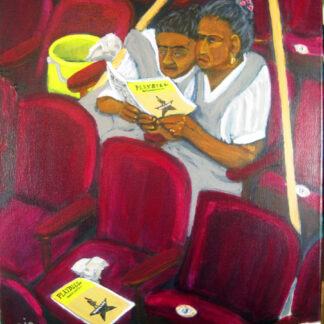