Neal Cassady was the heart and soul of the Beat movement. He did author an unfinished autobiography named The First Third but was made notorious by his friends Jack Kerouac as the character Dean Moriarty in the novel “On the Road”  and as Cody Pomeray appearing in many of Kerouac’s other novels; Allen Ginsberg mentions Cassady in his epic and revolutionary poem Howl as “N.C. the secret hero of these poems.”

After becoming famous due to the success of his literary friends, Cassady later in life became involved with another set of literary friends around Malcolm Cowley’s Stanford writing class including Ken Kesey, Ken Babbs, Robert Stone, Christopher Lehman-Haupt, and Larry McMurtry to name a few. He became the designated driver of the very first Magic Bus owned by Ken Kesey and his band pf Merry Pranksters. Cassady famously drove The Bus known as “Further” (sic) across America, at one point venturing to upstate New York to visit fellow psychedelic pioneer Dr. Timothy Leary. Ginsberg was there with his camera and captured the iconic meeting. aboard Furthur.

My painting is an abstract coloration of the iconic meeting of LSD pioneers inspired by Allen Ginsberg’s black & white photograph. 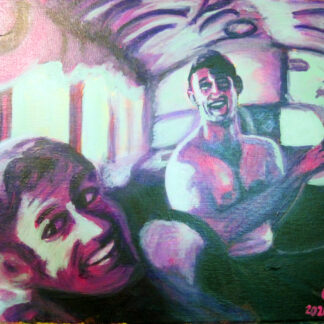 You're viewing: Cassady Meets Leary with Ginsberg Aboard Furthur $600.00
Add to cart