Breaking Bad is an American neo-Western crime drama television series created and produced by Vince Gilligan. The show aired on AMC from January 20, 2008, to September 29, 2013, consisting of five seasons for a total of 62 episodes.The scenes are located in and around Albuquerque, New Mexico.

By the way, I once shared a joint with Vince Gilligan in the parking lot of the X-Files writers’ offices, but that’s kinda a long ‘nother story from long ago…

I always consider iconic scenes from TV and movies to be subjects akin to mythology or history paintings in classical art traditions. 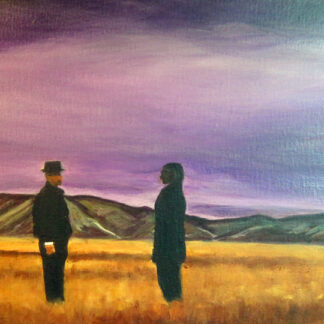