In stock (can be backordered)

I believe that the storytelling potential of modern cinema qualifies film as a medium of modern mythology, in particular the recent “superhero” genre which features modern versions of gods and heroes. Because mythology has always been an appropriate subject of painting, I believe that iconic scenes from movies that exist in millions of consciousnesses are legitimate subjects for modern representational and allegorical fine art.

The Avengers as Gods & Heroes

This particular scene which my painting depicts is the “Easter egg” following the end of the final credits of the first Avengers movie (2012); during the movie, Tony Stark (Ironman) mentions he knows of a great shawarma restaurant in Manhattan where they should meet after the finish saving the world from alien invasion. Here, the group of gods & heroes sit shell-shocked and exhausted, reflecting on the carnage wrought during their battle, while the falaheen workers calming clean up the catastrophic mess around them. 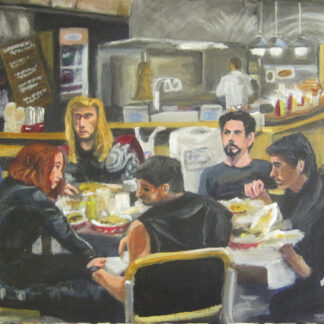