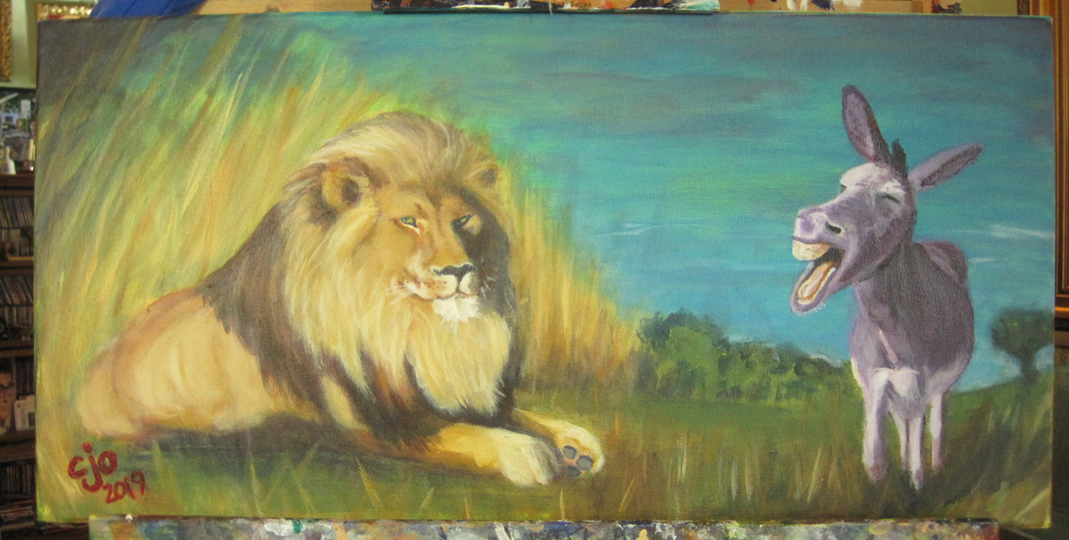 Origin of my Aesop’s Fables Series

I have a book that Mom gave me when I was very young of illustrated Aesop’s fables. I recently re-read the entire thing and thought I might like to paint my own interpretations of some of my favorite fables.

This is the first one I’ve done in that potential series. As with many of my paintings, I like this because it makes me laugh.

“Aesop’s Lion and Ass” acrylics on 12×24 canvas; completed Fri Sep 13, 2019.
My paraphrasing of Aesop: Lion is minding his own business, when this donkey wanders over from his own green pasture just to bray complaints at the Lion, about what? Who knows? Lion doesn’t speak Ass. While Lion knows he has the sheer power to instantly slaughter the annoying dumb Ass, Lion is wise and knows it is not worth his effort nor the ensuing mess to respond. So Lion continues to mind his own business until the dumb oblivious Ass gets tired and leaves the arena, where it seems he is getting in too deep for his own ass.

Moral: “It is better to ignore rudeness than to be annoyed by it.”

Gallery of acrylic paintings by cjo

Snake and the Crab:

Always honest Crab begs his deceitful friend Snake to “Straighten up and be honest, give up your crooked ways” Snake refuses to act right, so Crab strangles his hopelessly deceitful friend Snake in his sleep. Looking at Snake’s outstretched body, Crab says sadly, “This would not have happened if you had lived as straight as you died.”

Moral: Good and Evil cannot live and work together.

Crafty Mouse & Strong Frog are fighting over who is Master of the Meadow, so intent in their struggle, they don’t see Kite swoop down to carry them away in her talons.

MORAL: Those who quarrel may easily find themselves in trouble.

Eagle snatches Fox’s pup as a snack for her eaglets, Fox begs Eagle for mercy for her child, and Eagle denies it. Clever Fox finds a fiery stick, climbs the tree, and threatens to destroy the nest & the eaglets (her own pup doomed otherwise). So Eagle has no choice but to return Fox’s pup to her unharmed.

MORAL: Expect to be treated the same way you treat others.